DRUMMER TOMMY ALDRIDGE ON RANDY RHOADS, [HE] WAS INSPIRATIONAL, [HEARING HIM] WAS LIFE-CHANGING” 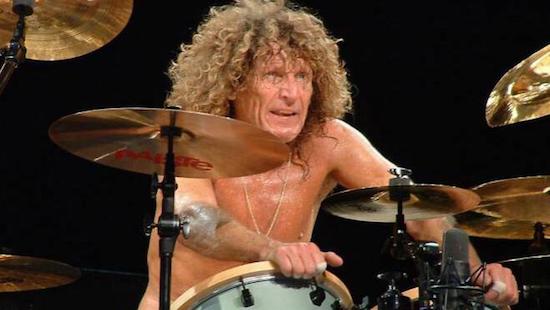 Drummer Tommy Aldridge was interviewed at the October 2018 Rock N’ Roll Fantasy Camp. Highlights from the discussion appear below. The interview appears in its entirety at the bottom of the story.

“I was living in England at the time, and I was working with Gary Moore, who was signed to Jet Records, who ultimately signed Ozzy. That was kind of the connection.”

On seeing and hearing Randy Rhoads for the first time:

“It scared me to death. It was inspirational. It was life-changing, not only from a musician standpoint… the first time I met Randy, he came to a rehearsal when I was rehearsing with Gary. He was a big Gary Moore fan, as most Les Paul players are, I think. He came to our rehearsal, and that’s when I met him. He was really in awe of Gary, and Gary’s tone.”

Speaking about whether he feels that Ozzy’s band — which, in addition to Rhoads, also featured bassist Rudy Sarzo — was the “best band” he’s ever played with:

“It was very exciting. From a musical perspective, it was probably the high-water mark of my career. Working with people like Randy Rhoads, guys like that, they kind of grab you by the scruff of your neck and lift you up to their level.”

Talking about why he decided to stay with Ozzy’s band after Rhoads’ passing:

“I felt… not an obligation. I just… sitting down with Sharon [Osbourne] and Ozzy, there was some momentum that they were trying to maintain, and I kind of took on the hat of the search of trying to find someone — not to take Randy’s place, because unlike most people, I don’t believe that everyone is replaceable. I don’t think any person is replaceable, really, because we’re each individual entities and only we can deliver the message that we were put here to deliver. Randy proved that in a billion, billion ways — he just wasn’t replaceable — but I was trying to find someone that would meet those mandates that we had, and trying to maintain the momentum. I was trying to help Sharon and Ozzy out, trying to find someone, so I was flying around like crazy auditioning guitar players… We eventually found Jake [E. Lee]. We got Brad Gillis in to finish those shows, and there was another gentleman by the name of Bernie Tormé, who was a British Strat cat. Awesome guitar player, and really, really cool, but the exact opposite of Randy. Randy was a really heavy, Les Paul cat. I remember that the first show he did was at Madison Square Garden, and I’ve never seen an organism as nervous… He had the weight of the world on his shoulders, coming in [with] the first gig [at] Madison Square Garden. You’re going to be nervous if you’re really well-rehearsed. I really, really felt for him, but he soldiered on. He came up later and he said, ‘I just can’t do this. It’s too much.’ He was really sweet to come in, but we got Brad in, and he was able to do the dates and do the tour with some aplomb, and honor as much as anyone can who Randy was… It was more me just trying to fill the void and trying to help out and trying to just do what I thought was the right thing.”

Aldridge is currently playing with Whitesnake. Their forthcoming release, Flesh & Blood, is due later this year, through Frontiers Music Srl.