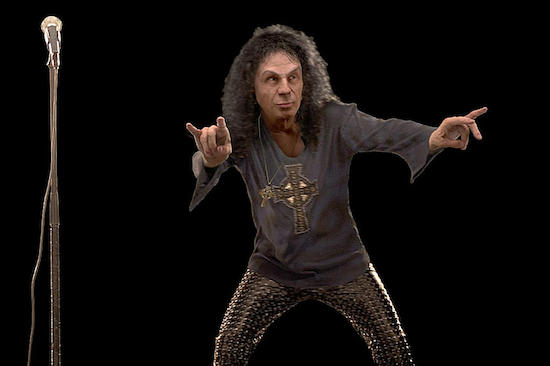 Ultimate Classic Rock reports that future plans for a hologram of [iconic singer] Ronnie James Dio – which polarized fans – have been possibly shelved.

“The hologram is on hold,” Dio’s widow, Wendy, reveals in an exclusive conversation with UCR. “I don’t know if we’re going to do that again or not.”

The hologram originally debuted in 2016, six years after Dio passed away from stomach cancer. A tour alongside Dio’s Disciples – a band assembled from the rocker’s former collaborators – followed. Using recordings of Dio’s vocals, the hologram “performed” onstage with the live musicians, creating a distinct concert experience for fans. Still, many criticized the project, with some calling it a cash grab that exploited the singer’s legacy.

“We went out, and we tried it – we did it,” Wendy notes. “There’s still talk about doing the hologram. I don’t know. I think that there’s so much more that’s come along developing-wise [as far as technology]. I just think that the fans would prefer to see Ronnie as being really Ronnie instead of a hologram.” Wendy is currently working on a new project incorporating archival footage of her late husband into a concert setting.

“We are going to tour. I’m working on some special effects of stuff with Ronnie,” she admits. “It’s film of Ronnie, not a hologram. … I found a bunch of footage that was done. I found the ISO film of Ronnie only, and we’ve been taking that and working with that with special effects and things. It looks really, really cool. I’m hoping this is going to come out really, really well. I’ve only seen a few bits of it. It’s a long procedure and expensive, so we’ve been working on it. But I think the fans will like it and enjoy it.”

The current plan is for the Dio Band (as they’re now called) to tour in 2022. A documentary is also slated for next year that will chronicle the singer’s life.

“It’s interviews with lots of different people that played with Ronnie,” Wendy says of the film. “Ronnie’s peers and friends who are musicians, obviously. So it’s very, very, very interesting. I’m very excited about it, and I really look forward to that coming out next year.”

Dio’s autobiography, Rainbow in the Dark, will be released on July 27th. The singer began working on the memoir before his pasiing. Wendy Dio collaborated with writer Mick Wall to complete the book. Read more information about the book here.