ANTHRAX’S 40TH ANNIVERSARY LIVESTREAM TO BE RELEASED ON BLU-RAY, CD AND DIGITAL 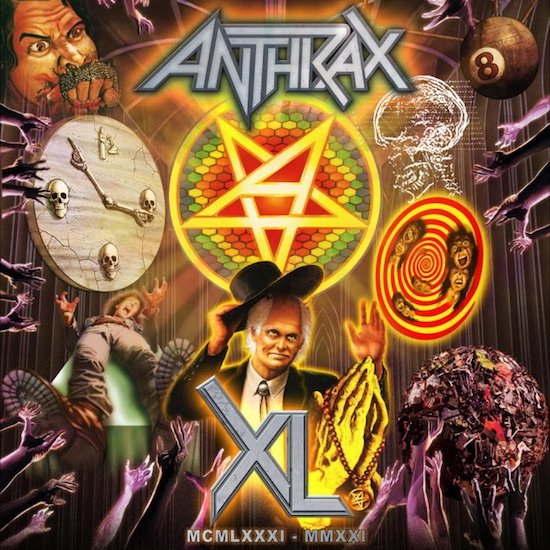 July 18th, 2021 marked the 40th anniversary of thrash metal pioneers Anthrax. The celebration began in May of last year and culminated on July 16th-17th with a global livestream event shot at the Los Angeles soundstage/studio The Den. For two-plus hours, Anthrax performed an extensive set of hits and deep cuts pulled from their vast catalog. Anthrax is proud to announce that the entire performance, plus never-before-seen rehearsal footage and guitarist Scott Ian‘s New York City “walking tour,” pointing out the spots that played a role in Anthrax’s formation and history, will be released in North America on July 15th on Blu-ray / CD / Digital (Megaforce). Anthrax XL will also have a European digital release on July 15th (Nuclear Blast), followed by a Blu-ray release later this year.

Also, Anthrax serves up a taste of the Anthrax XL: celebration livestream with Aftershock, the Blu-ray and CD’s first single/video, that can be viewed below.

“Forty years doesn’t feel like 40 years,” said drummer Charlie Benante. “Sometimes, I have to remind myself about how long this strange trip has been. I enjoy playing these songs, they’re such a huge part of my life, and I know for a lot of our fans, they play a big part in theirs as well.”

From the night of the livestream, bassist Frank Bello recalled, “For me, each song was like reading through a scrapbook of my life and the band’s career. Specifically, Madhouse, one of my first recordings with the band, and then to where we are now with Blood Eagle Wings. What a great ride it’s been. I’m very grateful.”

“Even though we were performing in a studio with just the crew there, we played that set like we were in front of 50,000 screaming fans,” said vocalist Joey Belladonna. “I felt like we made a full-on connection with everyone watching from their homes or wherever, and that they connected with us. It was quite an intense experience.”

Currently, Anthrax is about six months into its 41st year, and the band — Belladonna, Ian, Bello, Benante and guitarist Jon Donais — doesn’t quite have their 40th-anniversary in the rear-view mirror. Said Ian, “We had planned to do a big 40th-anniversary world tour last year, but because of COVID, we couldn’t. So we’re doing our 40th anniversary this year, our 41st. We’re starting in America in July, going out with Black Label Society and Hatebreed, and then we headline a U.K. and European tour this fall. We’re all really looking forward to being out on the road, playing shows and some deep cuts to celebrate our 40th with our fans.”

The track listing for the Anthrax XL Blu-ray / CD / digital is as follows:

Formed by Ian and bassist Dan Lilker in Queens, New York on July 18th, 1981, Anthrax was one of the first thrash metal bands to emerge from the East Coast and quickly became regarded as a leader in the genre alongside Metallica, Slayer and Megadeth.

Active over the past five decades, Anthrax has released 11 studio albums, been awarded multiple gold and platinum certifications, received six Grammy nominations, toured the world since 1984 playing thousands of shows, including headlining Madison Square Garden and playing Yankee Stadium with the Big Four.

The band’s latest album, 2016’s For All Kings, was called by some critics Anthrax’s strongest effort to date. Its arrival followed a five-year period during which the group experienced a rebirth of sorts, beginning with the group’s inclusion on the Big Four tour, and continuing with the 2011 release of comeback LP Worship Music.

GENE SIMMONS DOUBLES DOWN ON HIS “ROCK IS DEAD CLAIM”

X17 Online caught up with KISS bassist/vocalist Gene Simmons and guitarist/vocalist Paul Stanley as they were checking in for their flight before heading to Europe for their summer 2022 tour. Simmons was asked to clarify his previous “rock is dead” comments, and he said (as transcribed by blabbermouth.net), “Rock is dead. Because as soon as fans were able to download and fileshare for free, new bands didn’t have a chance to make a living. And that breaks my heart, because there’s so many great talented young musicians and writers who are never gonna get the chance that I got. Anything that is free or a penny when it should cost a dollar or more soon is worthless.”

“From 1958 until 1988, we had Elvis [Presley], The Beatles, all the great blues men, Madonna; in disco, you had the great Motown stuff which is unequaled; you had heavy bands — Metallica and Iron Maiden and all that stuff — U2, Prince, David Bowie, all that,” he continued. “From 1988 until today is more than 30 years. Who are the new Beatles? Who are they?”

“Right around ’88, Napster and all the rest of that showed people how to get music for nothing and you took away the value,” Simmons added. “Then musicians can’t earn a living. Not the old ones who are big and fat and rich. I understand. But the baby bands, it breaks my heart. They’re not gonna get the chance. Rock is dead.”

Asked if the decline of the music industry as consumers value access over ownership and experiences over assets has affected the size of his royalties at all, he said, “No. We make more than ever before. So it’s not about me. It’s about the baby bands.”

See the video below: 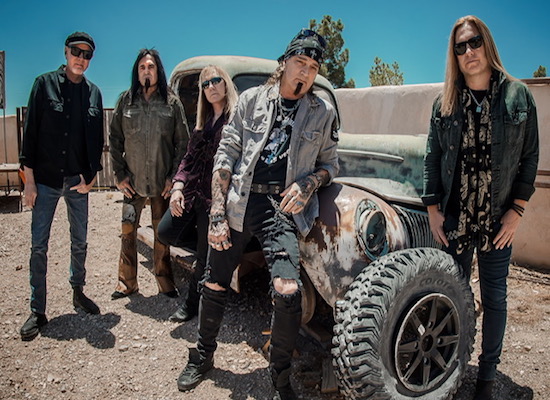 For a band to continue to thrive 40 years in the music business, the mantra must be, these songs are bigger than any one member. Grammy nominated hard rock legends Great White are adding onto that line with the saying: expect the unexpected. It’s rock and roll, baby. The peaks and the valleys haven’t stopped– nor has the music. Great White’s ride runs deep and its passion for the music goes beyond any depth.

Four decades in and Great White is pleased to announce that it has enlisted Andrew Freeman to take over vocal duties.

“Andrew brings another vocal perspective, a different grit in his delivery,” lead guitarist, Mark Kendall said. “We’re so proud of our past. We’re humbled that our fans have stood by us for all these years – Andrew being here now is the next chapter. We couldn’t be more excited for fans to hear him sing the hits and help us continue to forge ahead.”

“I’m absolutely honored to contribute to the Great White legacy,” Freeman, who previously toured as guitarist for The Offspring, sang lead for George Lynch’s Lynch Mob and is also the lead singer for Last In Line, a band made up of former Dio members. “I’m fully aware of the history of this band and its brotherhood. Let’s rock.”

To experience their hits live in concert—Rock Me, Mista Bone, Save Your Love, House of Broken Love, and Lady Red Light—is to ride an emotional wave of sultry connections, arousing lyrics, and an all-out marathon of hard-hitting orchestrations. Audiences might also hear tracks like Something For You, Hard To Say Goodbye, Big Time or one of the many deep cuts from Great White’s 13 studio albums.

Catch Great White on tour! More dates are being added and all dates subject to change. Visit OfficialGreatWhite.com for additional details.

California-based Great White is Mark Kendall (guitar), Michael Lardie (guitar, keyboards), Audie Desbrow (drums), Scott Snyder (bass), and Andrew Freeman (vocals). Since 1982, the Great White sound has captivated audiences worldwide with crushing, blues-based guitar riffs and swagger that invokes an emotional high for anyone that listens. The band’s core writing team of Lardie and Kendall forged numerous hits over the years, and when Desbrow joined in ’85, the grooves hooked an amazing stride. Now for more than a decade, Snyder has merged his unforgiving rhythm to Desbrow’s relentless percussion. 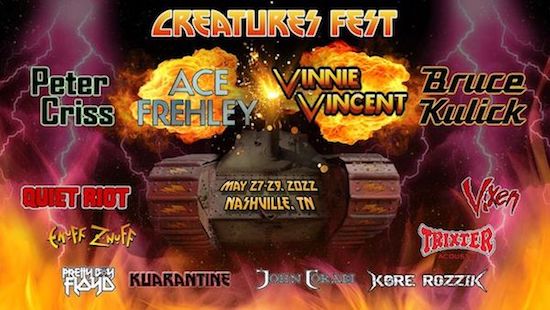 Some fan filmed videos of the performances have been posted online and can be seen below. 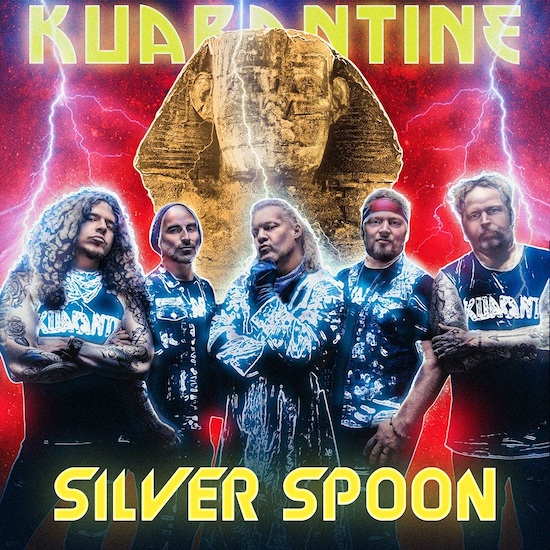 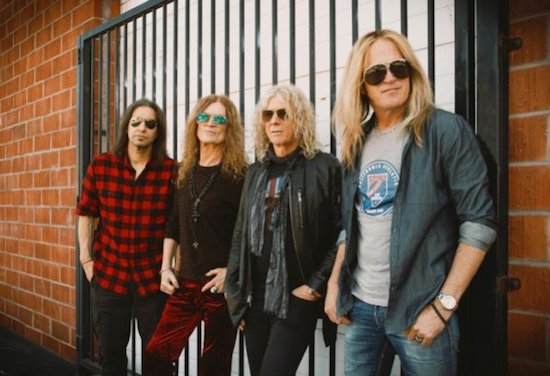 The Dead Daisies have released Radiance, the single from their upcoming album, set for release in August.

A thunderous opening sets the pace for Radiance, an eclectic, heavy rock track. The riff digs deep into a 1970s vibe originally created in the industrious heartland of England. With Glenn Hughes powering vocal, towering above the musical storm provided by the twin guitars of Doug Aldrich and David Lowy and hugely earthshaking drums from Brian Tichy, you’d better set the dial to eleven for this one.

Hughes commented, “Radiance was the first song we wrote for the album and wanted to address a universal awakening with the lyrical content. Musically, it’s heavy on groove and movement.”

On June 3rd, the band travels to Europe for the summer where they’ll tear up stages with Judas Priest, Foreigner and Whitesnake, and hit coveted festivals such as Graspop Metal Meeting (Belgium), Hellfest and God Save The Kouign (France), Masters Of Rock (Czech Republic) and the Time To Rock (Sweden),along with a string of killer headline shows.

Tichy said, “I’m excited for everyone to hear Radiance, a little slab of new Daisies rock. It’s been a lot of fun recording with Doug, Glenn and David, and now I’m psyched to throw down live with the guys. Hope to see you all out there on tour this year.”

The meta cinematic for Radiance will transport you into a parallel universe with the Daisies’ digital offspring, The Meta Daisies. Accompanying them in this new dimension is their guardian Daisy at the helm. Radiance will give you a taste of what’s to come in the Daisyland Metaverse.

The music video for Radiance will premiere on June 2nd with younger and more powerful Avatars. Now, this is taking things to the next level and another first for a rock band.

Aldrich said, “Well, new music coming… we have a very unique and interesting song here called Radiance. Different than we have written before… It’s the first off our next album, so crank it up.”

The band’s latest album, Holy Ground, was released in January 2021, listen to the song, Holy Ground (Shake The Memory), here.