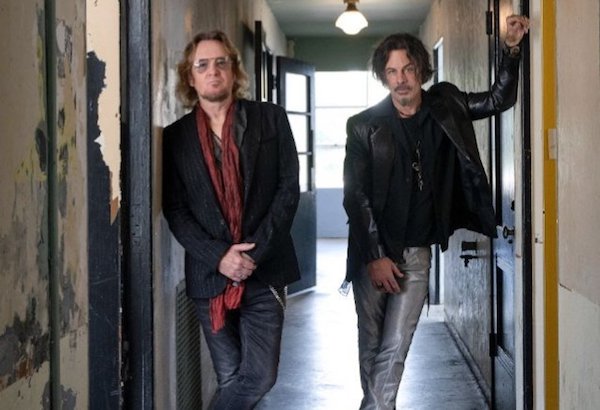 BMG will release a limited-edition 1 inch black vinyl of four previously unreleased tracks by Adrian Smith and Richie Kotzen‘s project Smith/Kotzen on November 26th in conjunction with international Record Store Day’s Black Friday event. The Better Days EP reflects the ongoing strength of the dynamic writing and recording partnership between these two world-class musicians, following their eponymous debut album released in March 2021 to media and fan acclaim, charting in the Top 20 in markets such as U.K., Germany, U.S. and Canada, a tremendous accomplishment for an inaugural collaboration project.

Better Days continues this trajectory with its huge hooks and driving riffs, coupled with the pair’s now-traditional vocal trade-offs building to crescendo with its soaring, unforgettable chorus, see the video below.

The full track listing is:

The final two songs on the EP were recorded at Windermere on Turks & Caicos Islands in March 2020. Better Days and Got A Hold On Me followed at The House recording studio in Los Angeles in April 2021 when Smith/Kotzen were finally able to reconvene after lockdown and to shoot an accompanying video for the title track. As with the Smith/Kotzen album, the EP was produced by Kotzen and Smith, and mixed by Kevin Shirley.

Kotzen comments, “When Adrian came over to L.A. earlier this year, we got together and started throwing ideas around and we very quickly came up with the new songs. ‘Better Days’almost seemed to write itself. It’s got a nice groove to it. Adrian came in with the riff and we came up with a melody for the chorus together, pretty much working to the same formula we used when writing the Smith/Kotzen album, bouncing ideas off each other.”

Smith adds, “Better Days‘ is a song I’m really excited about. I think its slightly different to the songs on the Smith/Kotzen album — it’s kind of heavy but melodic. I’d played Richie the riff and I was looking for a reaction, and I got one. Kind of like the old grey whistle test scenario — there was a spark and we started building the song from there. I’d have an idea, then Richie would have an idea and we’d go back and forth, like building blocks.”

Better Days will be available from all good independent record stores and available as a download.

For more details about the Smith/Kozten release, and to listen to previously released songs, please click on the highlighted song titles: Taking My Chances, Scars, Running and Solar Fire. As always, if you are having trouble viewing any of the media, please refresh your browser. 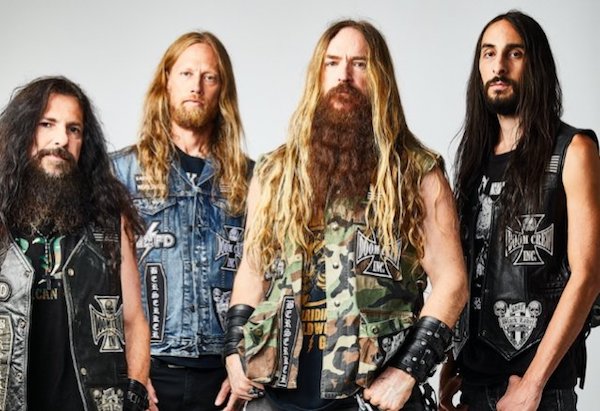 Black Label Society has released the official music video for the song End Of Days. It comes from the band’s forthcoming eleventh studio album, Doom Crew Inc., which will be released on November 26th through MNRK Heavy (formerly eOne Music). The video can be seen below, if you have issues, please refresh your browser.

Video director Justin H. Reich states, “If there is one thing that Zakk loves, it is comedy. More specifically, classic comedy (ala Mel Brooks, etc.) We both love it, and I think that’s why we work so well together. We both operate on that same wavelength where if he sends me a kernel of an idea and I immediately know where to take it.

The End Of Days video idea started with Zakk sending me viral videos of a panda and bear chasing each other through a mall, which I thought were hilarious and gave us a great starting point to create our own original story. It gave us plenty of funny moments and introduced characters normally not seen in a Black Label Society music video. Luckily, we were able to pull it off and create something fun and buzzworthy that BLS fans all over will enjoy.”

To read more details about Doom Crew Inc., and to watch a video for the band’s first single,  Set You Free, please click here. 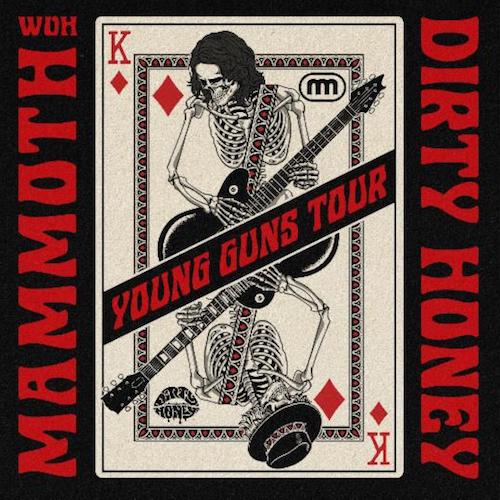 Two of today’s most dynamic live bands, Mammoth WVH and Dirty Honey, are joining forces to bring their high-octane rock and roll out on a 30-date, co-headline North American tour. The Young Guns tour begins on January 21st and will see the bands alternating the closing slot. The artist tickets presale begins tomorrow at 10 a.m. local. Pre-sale password is YOUNGGUNS; the general on-sale starts on November 5th at 10 a.m. local.

Mammoth WVH’s Wolfgang Van Halen states, “We played one co-headline show with Dirty Honey back in September. As soon as the night was over, we knew this would be a great package to take across the U.S. We couldn’t be more excited to share the stage with them and give all of the fans an unforgettable night of rock music.”

Both of these “young guns” spent their summer on high-profile U.S. tours — Dirty Honey with The Black Crowes and Mammoth WVH  with Guns N’ Roses. With only two live gigs under their collective belt, Mammoth WVH’s tour initiation was a baptism by fire, opening for the iconic Guns N’ Roses in stadiums. At the end of the tour, in Hollywood, Florida, Guns N’ Roses brought Wolfgang Van Halen back onstage to join them performing Paradise City.

After selling out their U.S. headline tour in June, Dirty Honey brought their sexy, bluesy rock’n’roll to amphitheaters with The Black Crowes. Vocalist Marc LaBelle grew up listening to the Crowes, so this tour was truly a dream come true. Winning over those who had primarily come to see The Black Crowes, Dirty Honey received standing ovations at the majority of the tour’s 35 shows. Not bad for a still-breaking opening act.

The Young Guns tour is in support of both artist’s self-titled debut albums; Mammoth WVH and Dirty Honey both released earlier this year. Both bands saw their debut singles — Dirty Honey’s When I’m Gone and Mammoth WVH’s Distance — occupy the number one position on Billboard’s Mainstream Rock Airplay chart. In addition, both bands’ debut albums made quite impressive bows; Mammoth WVH debuted at number one on Billboard’s Top Rock Albums chart, and Dirty Honey — the band, totally independent with no label affiliation — claimed the number two position on that chart.

“People who come to our shows are going to see two bands who are looking to prove that rock’n’roll is definitely very much alive and well,” said Dirty Honey’s Marc LaBelle. “We both carry the weight of that on our shoulders, and there’s a lot to prove.”

Dates for the Young Guns tour are as follows: 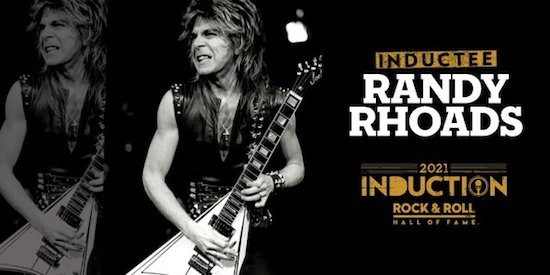 Iconic guitarist Randy Rhoads (Ozzy Osbourne, Quiet Riot) was posthumously inducted into the Rock And Roll Hall Of Fame during the 2021 ceremony, which was held on October 30th at Cleveland Ohio’s Rocket Mortgage FieldHouse

Rhoads received the Musical Excellence Award which is given to artists, musicians, songwriters and producers whose originality and influence creating music have had a dramatic impact on music.

He was inducted into the Rock Hall by Rage Against The Machine guitarist Tom Morello who stated in a video message. “Randy Rhoads is a peerless talent. He revived Ozzy Osbourne’s career as his gunslinger sideman. And it was Randy Rhoads’s poster that I had on my wall… You could study Randy’s songs in a university-level musicology class and bang your heads to them in a 7-11 parking lot.”

Also offering a video tribute was Metallica‘s Kirk Hammett, who stated about his death, “All of a sudden, the curtain came down unexpectedly and the show was over before it really, really got going.”

Ozzy guitarist Zakk Wylde spoke highly about his predecessor, saying “Randy, hands down, sits at” the round table of greatness in the Hall Of Fame alongside Jimi Hendrix, Jimmy Page, Jeff Beck, Eric Clapton and Eddie Van Halen.

Rhoads played on Osbourne’s seminal records Blizzard Of Ozz (1980) and Diary Of A Madman, but tragically died in a plane crash when he was just 25 years old, on March 19th, 1982. He influenced many musicians and is considered one of the greatest guitartists of all time.

Shortly after Rhoads’s induction into the Rock And Roll Hall Of Fame was announced, Osbourne told Rolling Stone, “I knew him for a very short amount of time. But what he gave me in that short amount of time was immeasurable in f–king greatness. To get somebody like Randy Rhoads to play on two albums, and for those two albums to sound as good as the day they were recorded, is something else. And I’m forever in gratitude for that. God only knows where that man would be today. The very fact that he’s not here to breathe the air is just a f–king crime.

Thank God that he’s getting recognized by the Rock And Roll Hall Of Fame. He finally got there in the end. I’m sad that his mother was not alive to see it, because he was very close to his mom. I know his brother, Kelle, and his sister, Kathy, are going to be really chuffed about it. It shows that he’s not been forgotten. He was a dedicated, true musician, and he was a lovely guy. I still think about him all the time.”

The induction ceremony will air November 20th on HBO and stream on HBO Max alongside a radio simulcast on SiriusXM.  Watch footage fan filmed of Rhoads induction, below.

KISS‘s second Las Vegas residency has been canceled. Tickets for the Zappos Theater at Planet Hollywood, which was scheduled to launch at the end of December, have been taken down from the Caesars Entertainment/Ticketmaster link and fans who already purchased tickets through Ticketmaster have been notified that the shows are no longer taking place.

The following shows/dates have been effected :

Blackie Lawless has released a video teaser for W.A.S.P.’s 40the anniversary tour. Watch it below.

For more details about this special tour, please go here.