OZZY TWEETS ABOUT THE PASSING OF HIS FORMER BANDMATE LEE KERSLAKE 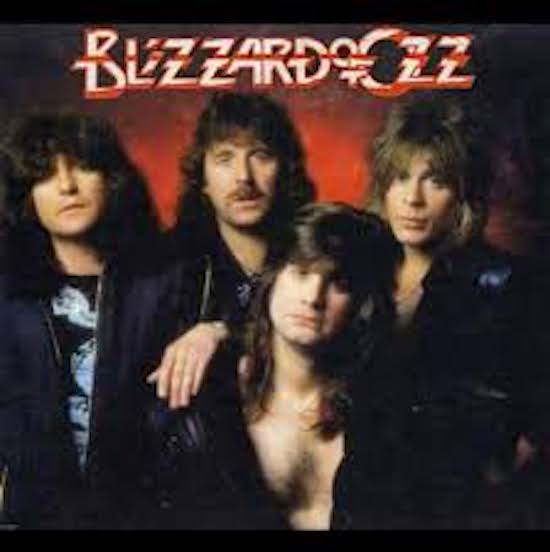 Ozzy Osbourne had tweeted a message about the passing of his former drummer Lee Kerslake, he writes:

“It’s been 39 years since I’ve seen Lee but he lives for ever on the records he played on for me, Blizzard of Ozz and Diary of a Madman. Lee Kerslake RIP”

Kerslake played with Ozzy’s band in 1980 and ’81 and on his solo albums — Blizzard of Ozz and Diary of a Madman. He also appeared in the 1987 Tribute Live album.

In related news, Ozzy celebrated the 40th anniversary of Blizzard Of Ozz by releasing an expanded digital edition, of his iconic debut solo album. Click here to read more about it. 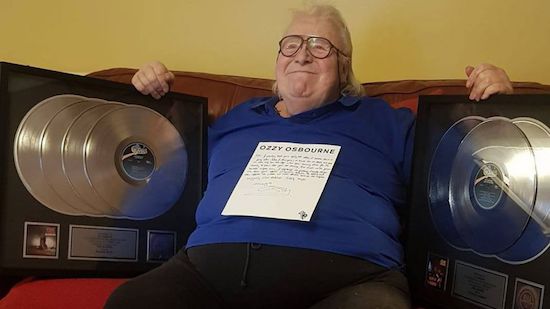 According to TMZ, Ozzy Osbourne, and Uriah Heep drummer, Lee Kerslake has passed away. at age 73, after a long battle with cancer..

One of Kerslake’s bandmates from Uriah Heep broke the news Saturday, saying, “It’s with the heaviest of hearts that I share with you that Lee Kerslake, my friend of 55 years and the best drummer I ever played with, lost his battle with cancer at 3:30 this morning.”

Lee played with Ozzy’s band in 1980 and ’81 and on his solo albums — Blizzard of Ozz and Diary of a Madman. He also appeared in the 1987 Tribute Live album.

Kerslake’s struggle with illness was long and hard. He dropped out of Uriah Heep in 2018 … four years after getting a prostate cancer diagnosis back. His last performance was in London, when he appeared to join the group for Lady In Black.

After Kerslake revealed two years ago his prostate cancer was terminal and had spread to various organs, Ozzy sent him platinum records for Blizzard of Ozz and Diary of a Madman (see picture above) Kerslake had said he wanted them, and Ozzy fulfilled his wish.

On February 17th, 2020, EddieTrunk.com posted an interview Greg Prato of Bravewords with did with Kerslake. During the discourse, Kerslake revealed he was battling spinal and prostate cancer, but said, “it is in remission at the moment.” He also revealed that he had recently purchased himself an “an electronic drum kit, and [is] playing again, because I want to do two more shows with Uriah Heep .” Kerslake also discussed working on his solo album. Click here to read that interview.

Lee is survived by his wife, Sue.

* First up, earlier today, a new animated video by Tiny Concert for Crazy Train debuted on YouTube. The clip features Ozzy and his band in an animated live performance. Watch the clip here.

* A newly upressed HD version of 2010’s documentary 30 Years After The Blizzard — originally only released as part of the Blizzard Of Ozz/Diary Of a Madman box set — will debut today at 6:00 p.m. (ET)/3:00 p.m. (PT) and run for seven days on YouTube, with a chat with Ozzy before the premiere.

* Ozzy will discuss Blizzard Of Ozz in a special one-hour 40 Years Of Ozzy Osbourne’s Blizzard Of Ozz special on his SiriusXM Ozzy’s Boneyard channel. Set to debut tonight (September 18th) at 5:00 p.m. ET / 2:00 p.m. PT and airing multiple times throughout next week, the special — which features a conversation between Ozzy and his close friend/musician Billy Morrison — will take listeners track-by-track through Ozzy’s first solo album on its 40th anniversary.

* On Sunday, September 20th at 7:00 p.m. ET / 4:00 p.m. PT, Ozzy will host a special Blizzard Of Ozz listening party on his Twitter (talking about all the tracks from the album) on its official release date anniversary.

* A selection of commemorative Blizzard Of Ozz merchandise (t-shirts, jersey and a track jacket) is available via Ozzy’s web site.

To read more about The 40th anniversary expanded edition of Blizzard Of Ozz, please click here. 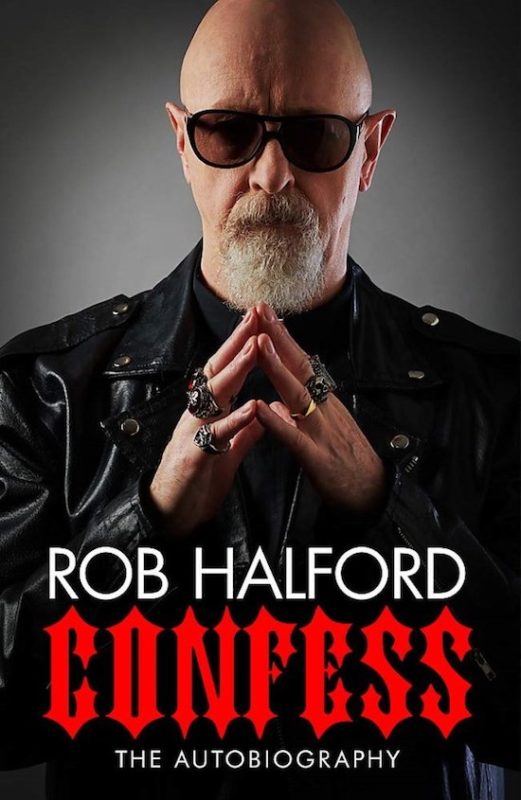 In the book, the singer admits to inviting Di’Anno back to his hotel room in an attempt to seduce Di’Anno when Maiden supported Priest on 1980’s British Steel tour.

Relations between the two bands became tense after Di’Anno cockily proclaimed Maiden would “blow Judas Priest off stage every night,” with Priest guitarist KK Downing threatening to have the band thrown off the tour.

“We didn’t really hang out and banter with Maiden much on that tour,” writes Halford in Confess, “but maybe I took Di’Anno’s comment that he would blow Priest off stage too literally… because the one night we got drunk together, I tried to seduce him. We went to my room to carry on drinking, but I was too pissed to try anything, and he was too pissed to even know what I wanted to try. I think that was definitely for the best.”

Halford promises that Confess: The Autobiography, which is published on September 28th, is “going to shock you.”

Halford has also recorded an audiobook version of his autobiography. 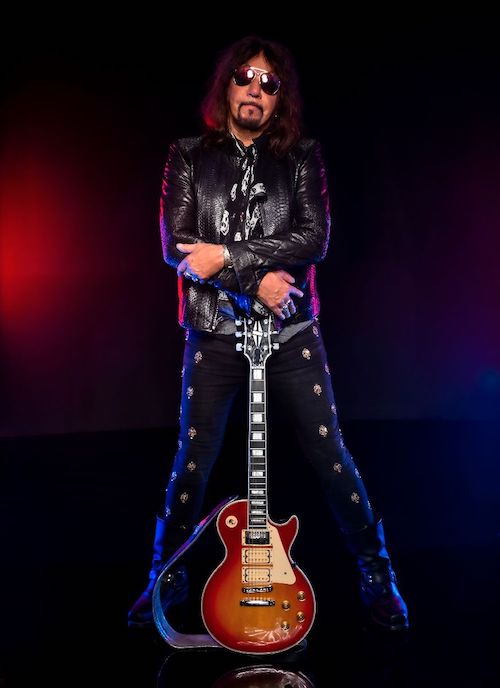 Greg Prato for Songfacts spoke with guitarist Ace Frehley about his top guitar solos in KISS and explains what drew him to some of the songs he covered on his Origins Vol. 2 album.

That was the first Led Zeppelin song I ever heard on record because it was the first song on Led Zeppelin I. I was lucky enough to see Led Zeppelin’s first New York appearance at the Filmore East when I was a teenager – they were opening for Iron Butterfly. They just blew me away. I knew from the minute I saw them that they were going to be huge. And of course, we all know the history behind Led Zeppelin.

I’ve done several covers of Rolling Stones songs over the years. I probably could have sang it, but I wanted to get a different twist on that song, so I called up Lita Ford, who is a good friend of mine. She sang Wild Thing on Origins Vol. 1. She came over for the weekend, and I coached her on that vocal. I got a really good vocal performance out of her. I was just thrilled with the end result.

I’m Down by The Beatles:

That was a song I always loved by the Beatles because it was not really that indicative of a Beatles song. Most of the Beatles songs had three-part harmony and were well put together and well-written, but I’m Down was more of just a kick-ass rock n’ roll number more in the vein of Chuck Berry.

I gravitated towards that song. I didn’t realize it was written in 1965… it’s a long time ago. But I got John 5 to play the guitar solo on the opening and he did a wonderful job.

I’ve been friends with Bruce Kulick for years. We did the Kiss Kruise several years ago together – his band was on the cruise with my band and several other bands. When Bruce found out I was doing Origins Vol. 2, he expressed interest in performing on it. We’re both Hendrix fans. He picked Manic Depression and we tracked it, we sent it to him, and he did a great guitar solo on it. Then we “riffed out” towards the end of the song, during the fade. I was really happy with what he did.

My live band had been performing She before the pandemic hit. My record company called and said, “We need a KISS bonus track,” so that was the first song that came to mind. The guys in my band all sing lead, so I let them sing lead on that song live. It gave me a chance to showcase my touring band on this record. I was really happy about that – they did a great job.

Songfacts: Which are your top five guitar solos in KISS?

Ace Frehley: The solo in Deuce, Shock Me, Strange Ways. I like the solo I did in God Of Thunder – it was just a different type of solo. Gene used to call it “dinosaur bends” when I would bend the strings really heavy – the low string. And maybe the solo in the live version of Rock And Roll All Nite – it’s just a nice, Chuck Berry kind of solo. Reminiscent of older rock n’ roll songs.

Ace Frehley’s Origins Vol. 2 will be released tomorrow (September 18th) . Pre-orders are available at acefrehleyorigins.com. Origins Vol. 2 is the followup to 2016’s Origins Vol. 1, which hit #23 on the Billboard Top 200 chart, and was his second highest-charting solo album and his 4th Top 40 album. 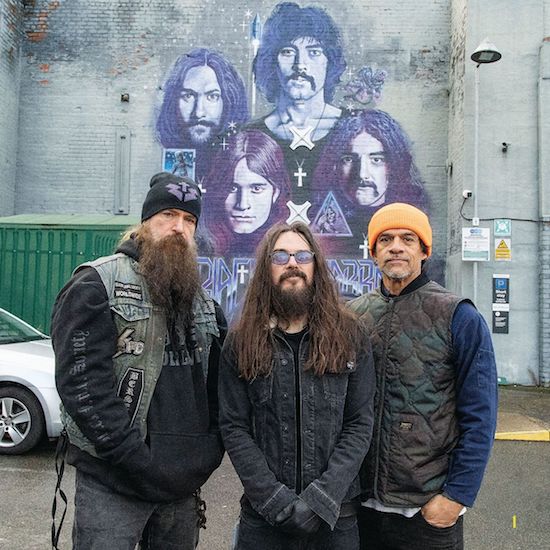 To read more about Vertigo, view a track list and to listen to Zakk Sabbath’s cover of Black Sabbath, please click here. To listen to The Wizard, go here.