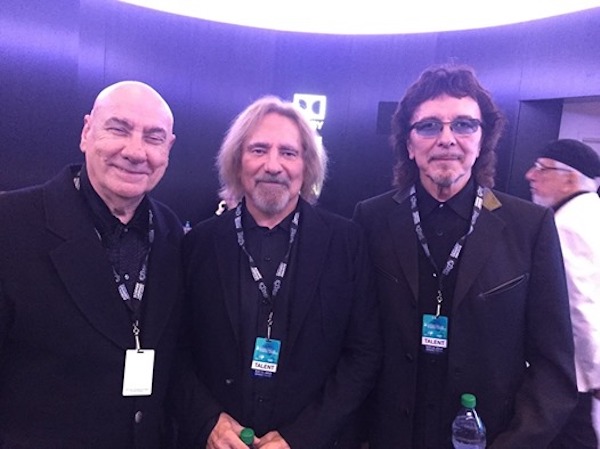 Bill Ward and his old Black Sabbath bandmates Tony Iommi and Geezer Butler were reunited in Los Angeles on Saturday night for the first time since 2015.

The trio were attending the Grammy Salute To Music Legends ceremony at the city’s Dolby Theatre, where Black Sabbath were honored with a Lifetime Achievement Grammy by the Recording Academy.

Rival Sons performed for Sabbath on the night, with the annual award given to artists who have “made outstanding contributions of artistic significance to the field of recording.”

Iommi later posted a picture of himself, Ward and Butler, saying, “Another Grammy! Great performance from Rival Sons yesterday, thanks guys.”

In other Sabbath news, an exhibition is set to get under way in their home town of Birmingham next month.

Black Sabbath 50 Years will run from June 26 until September 29th at the Museum & Art Gallery and will look back at their history, celebrate their contribution to British music, and explore the history between the band and their fans.

‹ IRON MAIDEN RELEASE VIDEO OF “FLIGHT OF ICARUS” FROM THEIR “LEGACY OF THE BEAST TOUR,” WATCH IT HERE