BLACK SABBATH’S GEEZER BUTLER DISCUSSES “THE END,” THE POSSIBILITY OF A NEW ALBUM AND BILL WARD 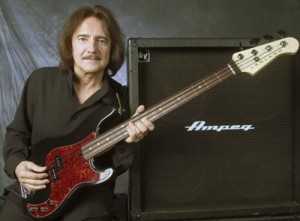 Jeb: Black Sabbath is about to do their final tour. A lot of band’s say it is the end Geezer, but then it isn’t the end. Is THIS tour really the end of Black Sabbath?

Geezer: It is one hundred percent the end. We’ve all agreed that this is it.

Jeb: How did you come to decide to call it quits? Was it Tony’s illness?

Geezer: It was our decision. Tony’s condition was an influence on it, but we all felt the same. The 13 tour went great. We just felt we’d do one more tour… to make it official, we called it The End. We are all in agreement that this can’t go on forever, so we should go out on the top.

Jeb: Are you looking ahead to the date where you are playing that last gig? Or is that just too much to think about right now?

Geezer: No, I have not thought about it yet. I won’t think about it until that last date is confirmed. We don’t know where and when it will be. We are still going to finalize where the last gig is going to be. It is better not to think about it yet. We are just taking it one day at a time at the moment. We are always looking forward to the gig that comes next. We take it one gig at a time.

Jeb: There have been rumors there will be one more studio album, but lately I’ve heard that is not the case.

Geezer: If there is then fine… but I don’t think there will be. It would be nice if there was another album. We had some songs left over from the 13 album, but we’re putting it out as a sort of EP that can only be bought at the gigs from this tour.

Jeb: I have to ask this question: I’ve heard that you were in a band with Ozzy Osbourne before he was with Black Sabbath. You were called Rare Breed.

Geezer: That is true, yeah. We only did a few gigs, locally, in Birmingham. That is how we got together. Ozzy lived literally two streets away from me and I used to see him around. He went to the same school as Tony Iommi. We lived so close together that we would see each other in the streets. I heard that he was looking for a band in the music shop… I didn’t even know it was him. I went to his house and it was Ozzy. He was a skinhead at the time. I thought, “This isn’t going to work out.” Skinheads at that time were into soul music and reggae. He liked Robert Johnson and blues so we got together and formed the Rare Breed. When that finished we were looking for a drummer and we went around to Tony’s house to see if he knew of any drummers and Bill Ward was there. Bill said he would join the band if Tony would come along and that is the way we got together.

Jeb: [On The End tour], will this be the greatest hits or will you throw in some rare songs?

Geezer: It is mainly… we are doing practically the whole of the Paranoid album. We’re doing everything but Planet Caravan. We tried that but it didn’t really work live. We’re playing mainly older stuff. We’re doing Hand of Doom. We have not played that for god knows how many years. It will be mainly old stuff.

Jeb: As thrilled as I am for Tommy to do this tour, the elephant in the room with every Sabbath fan is that Bill Ward is not present. I will be blunt… why not just give Bill the money?

Geezer: It’s beyond the money thing. It is not really anything to do with that. It is whether he’s capable of touring or not. On the 13 tour, he was not on that tour. About a week after we started he had to go into the hospital for major surgery. We would have had to cancel the tour if Bill was still with us. He hasn’t been well for a long time. He’s had a couple of heart attacks. You have to face facts when you get to our age and you’re not in great, great health rather you can go out on the road for two years, or whatever. It is a hard life to do. The easy part is when you’re on stage playing. It is all of the traveling and everything else that comes with it that is the hard part. I think Ozzy, in particular, didn’t think Bill would get through it. He certainly wouldn’t have got through the first part as he was in the hospital. We can’t keep cancelling tours just because the drummer can’t play.

Jeb: It is nice to hear you say it was not an easy thing to do.

Geezer: We started out with Bill on the 13 tour. That is the way we all thought it was going to be, that Bill was going to be part of this whole thing. It just turned out that is wasn’t to be. His health has to come first before anything.

Jeb: Are there any songs from a bass standpoint that you’re looking forward to playing?

Geezer: I am looking forward to doing Hand of Doom again as it is very bass orientated. I think 1972 is the last time we played Hand of Doom. We are always asked if we can do it, but for some reason we’ve never included it in the set. We have a lot of old classic Sabbath songs; to do that, it is hard to drop stuff to put songs like that in. This time we decided to put Hand of Doom in.

Jeb: Were you ever happy and satisfied to be the lyricist in Black Sabbath?

Jeb: Last one: Geezer what do you want to say to the fans of Black Sabbath that have stuck with you all these years?

Geezer: Thanks for keeping us here. Thanks for being with us for all of these years. It has been great. They really are the best fans that anyone could ever wish for. They’ve been with us since day one. They have been fighting for us and they are so loyal. It is incredible. We are so blessed to have them.